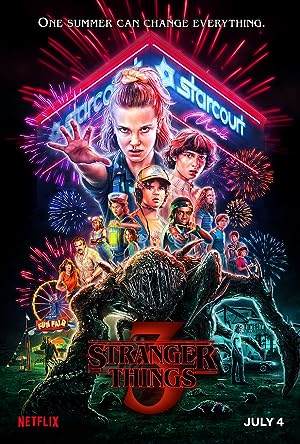 The Hawkins crew is growing up — and apart. In Stranger Things season 3 — out Thursday, July 4 on Netflix — the kids are now teenagers, which in turn affects not just the dynamic between the group but also the show on the whole. Mike (Finn Wolfhard) and Eleven (Millie Bobby Brown) are spending most of their time with each other, to the displeasure of the rest of the gang and her adopted father Chief Hopper (David Harbour). Having lost over a year of his childhood to the monsters, all Will (Noah Schnapp) wants is to play Dungeons & Dragons like the boys used to, but Mike and Lucas (Caleb McLaughlin) — who also has a girlfriend in Max (Sadie Sink) — aren’t really into it anymore. And Dustin (Gaten Matarazzo), feeling ignored by everyone, starts to spend more time with Steve (Joe Keery), which further suggests that the AV Club is ready for a split.

As always, Stranger Things is filled with nostalgia for those of a certain era, with famous scenes from TV shows such as Magnum P.I. and Cheers playing in the background, in addition to a soundtrack boasting of hits from Madonna, The Cars, Cutting Crew, Don McLean, Foreigner, Jim Croce, REO Speedwagon, and Corey Hart. Some songs are used particularly for the lyrics’ on-the-nose effect. And thanks to intriguing-enough thrills (though lacking the emotional impact of season 2) and the joys of watching the Hawkins crew turn into adults in front of our very eyes (albeit potentially at the cost of their close-knit friendship), Stranger Things season 3 turns out to be a welcome return for Netflix’s popular sci-fi horror series. It’s made a bit more special by the fact that it spent nearly two years off air.

With its amazing 80s atmosphere and creepy X-files meets E.T feel this show is set to impress. Within its first 8 minutes of run time I could tell I had found something special here in Stranger Things.

Its intriguing story gives information at a great pace and I never felt myself getting confused of bored and there were enough twists or turns to keep me interested. This also had some rather great horror sequences and their use of lights flickering while yes a common trope fit so well in to the story I was on the edge of my seat every time the crackle of electricity shot through my speakers and the lights flickered.

The characters of the show are the true stars here, I loved every single one of them. They were all great with amazingly interesting flaws and the way they mix and clash with one another was fun to see unfold. They certainly help to carry this show although I would say that the government antagonists of the show felt a little flat and under developed and not nearly as memorable.

Production values are also quite good with some beautiful cinematography, editing, lighting and sound. My goodness I loved their music choices. I would say that the CGI does look a little obvious and from time to time I did notice some issues where the scenes didn’t look quite up to scratch. I do think however I’ve been spoiled for visual quality since Game of Thrones so I would take that criticism with a grain of salt because it certainly didn’t detract from the overall experience. The setting and style of everything in the locations where also great to see and felt real and interesting. The way everything was shot also captures every moment expertly and really helps to draw out those story moments with greater emotion.