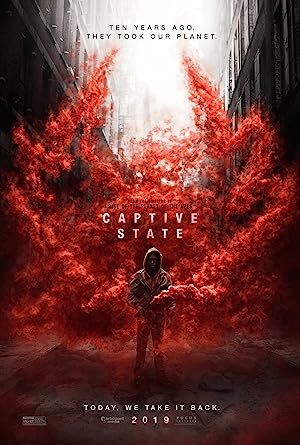 In the year 2019, Chicago is placed under martial law when extraterrestrials invade across the globe. The Drummond family is attempting to flee the city but every exit is barricaded. After breaking through an unmanned barricade, the car stops inside a tunnel where extraterrestrials are waiting at the other end. Before they can reverse, the aliens attack, vaporizing the father and mother in the front but leaving their two sons alive in the backseats.

Nine years later, the world has capitulated to the invaders and submitted to their governing authority, calling the aliens “The Legislators”, because all subsequent laws and rules of governance come from them. In the years that followed Earth’s surrender, the aliens have conscripted humans to build suitable habitats for them far underground called “Closed Zones”, walled off from the rest of the city with access only granted to high government officials.

Several times a year I am tempted to walk out on a film because I don’t like it, but I stay with the hopes that by the end it will somehow turn the corner. This is one of those films. The first 40 minutes is unengaging, with a series of characters we know little about and care about even less. Slowly but surely it turns the corners, and the hints, which are abundant, begin to make sense.